Not so long ago I had a very minor Twitter spat with a former student of mine in which I advanced the view that knowing the Fibonnaci sequence was more useful than instant recall of 11×12. I was shot down, with the suggestion that I didn’t care about working class kids. Well, I guess, I would like to claim that I care about all kids, regardless. And, it seems that being able to read and understand mathematical information has suddenly become a whole lot more important than previously. Oddly enough, memorising specific number combinations has not proved to be of any great importance in this. Nor, to be fair has the Fibonnaci sequence cropped up. But, of course making sense of patterns and relationships absolutely has. We now live in a world in which it is expected that we can look at a graph with a logarithmic scale and read it sensibly. Also, we are being told (as I write) that the rate of increase in case numbers is decreasing. From this we need to know if the case numbers are going up or down and thus, what is in fact decreasing.

In school mathematics, the myth of application is ever present. Mathematics solves problems in the real world we are told. Except that we start from a curriculum containing specified mathematics, that must be taught, generally in a given order.

So, of course, the real world is bent and twisted to fit the mathematics that needs to be learned. In our teaching of distance and time, how often does a car travel at a uniform speed, showing a straight line on a distance time graph starting at the origin? (Instantaneous acceleration is a useful phenomenon in maths lessons, but nowhere else). The pandemic has not thrown up many linear models, or even quadratic models. Learning the maths presented in a distorted and damaged context is worse than unhelpful. Either the learner knows enough about how the real world works to recognise that the maths lesson version is simply not real and therefore the maths is not a model of it, or worse they build their knowledge of the world through this damaged notion that cars really do travel with contant speed, starting from rest. So, when stuff actually matters, as it really does in this pandemic,  learners of school mathematics do not have the tools (they were not allowed to play with functions, instead they had to learn linear, then quadratic and never quite reached exponential) and would therefore expect reality to be required to fit. 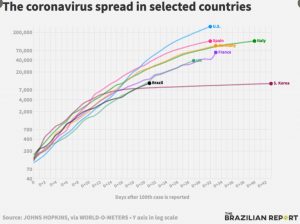 So, the growth rate graphs with the exponential scales, that then look much more linear, show the death rates in the USA only ever so slightly higher than those in Germany. This can only be because that is the way it was.

If we are to claim that maths has some use value and relavence to the word outside the maths classroom (as this year it really has like never before), then we need to engage our students in sense making. Looking at live data and playing with the maths to see how and where it might fit. With graphing software it is no harder to draw an exponential than a linear function and when it is driven by data that the learner has some investment in, then they will want to know. Building relationships between a felt and experienced world and mathematical objects useful for representing it, is complicated and muti faceted, but possible if we allow the setting to lead the maths rather than the other way round. I still have some ultrasound distance sensors which we would use connected to real time graph drawing software. Students would walk on a straight line towards and away from the sensor to create different distance time (and later velocity/time) graphs. In this way the relationship is created and really felt. The motion to create a sine curve as a distance/time graph is a very lovely thing. Equally our Pizza project had students find models for the cooling of a pizza from short term data (it looks very linear over the course of a 10 minute experiment, but what does that say about what will happen in the medium to longer term?) The implications of a model can only be engaged with in a context which behaves as the real world actually does.

I picked the Fibonnaci sequence as an example of interesting variation. 11×12 is not interesting, nor is it useful (except, I did find this example). To make sense of a world that behaves as the one our students actual live in does, they need to see what they learn as a examples from a range of useful tools that can, when critically applied, give us ways of seeing what happens in that world in a more manageable way. Linear and quadratic are examples of functions, of which there are many, many more. Times tables are number relationships of some power and Fibonannaci, Square, Triangle numbers also. So, when we see variation and relationship we take a flexible, open and always critical view of it.

I was invited speak at the Maths Mastery conference in London last month. My essential brief was to engage with using technology to support mathematics learners. I have increasingly wanted to take a wide view of things so I interpreted technology very liberally. Having trained teachers in using graphing calculators for both TI and HP for many years, I am well versed in the language of multiple representations. The possibility is there to see a function represented graphically, symbolically and as a table of values and to swap quickly between them and to see how each representation gave you different insights into the nature of the function.

For example, a linear function has a particular algebraic form, it has a straight line graph and a table of values with a common difference. We exploited all of these in our Pizza project, showing that the natural tendency when watching change over time (the declining temperature of a cooling pizza) is to look for a linear change. The difference is roughly equal over the minute intervals we used, for the 10 minute length of the experiment. This is forcefully confirmed visually when a real time graph being drawn is very nearly a straight line. So, we feel empowered to hypthesise a linear function which symbolically can be used to calculate extrapolations. It is these that undermine our initial thoughts (put time = 24 hours into the function and we quickly see there is something wrong). Then we can go back to the graph and change the axes to see the nature of the slight curve and look again at the nature of the differences from equal differences, which themselves have a pattern.

END_OF_DOCUMENT_TOKEN_TO_BE_REPLACED

The availability of transcripts from the June GCSE EdExcel maths papers provides an extraordinarily rich resource to try to make sense of students’ thinking in engaging with the questions. I spent a rewarding couple of hours with a head of maths looking at questions in the ‘crossover’ i.e. where they appear on both the foundation and higher papers. That would imply that these are all targeted at grade 4 or grade 5. One very clear and immediate conclusion to be drawn is that it is easier to get a 4 if you take the foundation level exam. Comparing higher and foundation responses to the harder crossover questions, a 4 could be achieved without success in these but a 5 was not achieved even with success on some of the crossover questions at higher. This will need a more detailed analysis, but anecdotally it seemed very clear. This HoM’s school achieved outstanding results at grade 4 with a strategy of erring on the side of entry at foundation.

END_OF_DOCUMENT_TOKEN_TO_BE_REPLACED

This has been a long time coming, but I intend to restart sharing thinking about work I’ve been doing in projects around the world! I am part of a Sheffield Hallam, British Council project for the Indian Institute of Science Education and Research in Pune. The idea is to work with teachers of undergraduate science and maths to develop tasks requiring problem solving skills in settings of genuine benefit. The problem with maths, is that the problems are frequently unrealistic or too simplistic. One of our co-tutors wrote to ask my thoughts on this … END_OF_DOCUMENT_TOKEN_TO_BE_REPLACED

Here are links to my collection of maths trails:

Publishers are feverishly producing complete new sets of text books for English schools using consultants and academics from Shanghai and from Singapore. This comes on the back of a Nuffield Foundation report suggesting that the poor quality of text books is a key issue for schools in England. The overwhelming demand to teach to the test is now accepted, with even Ofsted saying there was; “too much teaching concentrated on the acquisition of disparate skills that enabled pupils to pass tests and examinations but did not equip them for the next stage of education, work and life.” So, in a major crisis of confidence for English maths educators, we look to the successful TIMMS nations. But what are the key elements of the Shanghai Maths ‘Mastery’ and Singapore Maths? Well certainly in Singapore they are keen to assert that this is a reworking of what was best in maths education in the UK from the early days of the ATM with Dienes, Gattegno and Cusienaire. END_OF_DOCUMENT_TOKEN_TO_BE_REPLACED

Next week Tim Peake is going to the international space station. This is an important moment in UK space. The UK space agency has organised a whole raft of school activities, events, resources and so on to coincide with his mission. One of these is the Space to Earth Challenge. The essential idea here is that pupils will find wacky and amusing ways to travel the distance that Tim will travel in returning to Earth and track their progress in doing this. I was commissioned by the project and HP to write a set of maths activities to develop the mathematical thinking involved in the parallel science and PE activities that had been developed. END_OF_DOCUMENT_TOKEN_TO_BE_REPLACED 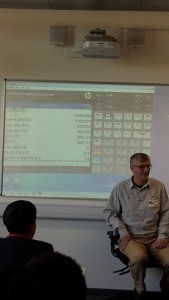 It is always good to get the chance to actually teach real kids in a real school. I have always said that if you are going to teach students about linear functions, it would be a crime to do it without any technology. So, up comes the topic and in I go with the technology. We have organised a class set of HP Prime handhelds for the school and my job was to get students started using them, so they would be sufficiently familiar at the start of the linear functions topic. END_OF_DOCUMENT_TOKEN_TO_BE_REPLACED

I had the opportunity to visit the very beautiful Swiss city of Zurich last week to run a session for Swiss senior high school maths teachers. It is always very interesting to see the differences in the way that mathematics teaching and indeed schools are in different countries. Firstly, the school is for ages 16-19 and has roughly 3000 students in a city centre environment. Striking interior architecture, excellent catering facilities, a range of fascinating teaching spaces and a very well equipped presentation room were all very impressive (and that’s not to mention the three floors of underground heated car parking!) END_OF_DOCUMENT_TOKEN_TO_BE_REPLACED

At the ATM London Branch conference on Saturday, Kate Gladstone-Smith from Langdon Park School in East London, presented her research into the nature of communication she had observed in maths classrooms and how this differed according to the set, the students were in. (Anyone not from the UK will need to know that in English schools teachers decide in advance how well students will do with a subject and place them in ‘top’ and ‘bottom’ sets (i.e. class/teacher groups) accordingly). END_OF_DOCUMENT_TOKEN_TO_BE_REPLACED